When you’re building a membership website, coming up with your plan names can be a tricky subject.

In this post, we’re going to dig into everything that you need to know about naming your membership levels. Here’s what we’ll cover:

If you’re using Paid Member Subscriptions to make a membership site, this post will help you name your subscription plans. And even if you’re not, you’ll still find plenty of useful information to help you make a better membership website.

What Are Membership Level Names?

With a membership website, you allow users to register on your site and become “members”. They could become members to access exclusive content, support your site, get access to one-on-one coaching, or pretty much anything else.

The key thing is that, on most membership sites, not all memberships are created equal – you typically have different “tiers” or “levels” of membership.

Well, each of those different “tiers” needs a name so that you can differentiate them, and that’s what membership level names are.

Why Do Membership Level Names Matter?

How you name your membership levels matters for a few reasons.

The first is basic clarity. Just by looking at the name, you want people to have a good idea of what it offers. For example, if one membership works on annual billing and the other on monthly billing, you want to make that clear with your naming structure.

The second is branding. For a lot of websites, membership level names offer a fun way to add branding to the site – we’ll look at some real-world examples of this in the next section.

Finally, membership tier names are also important from a psychological conversion optimization perspective. We’ll talk about this later on in the post, but the basic idea is that membership names can push or pull subscribers towards certain plans, which is important if you’re trying to maximize your revenue.

For example, would you rather be a “Basic Member” or an “Elite Member”? Taken in a vacuum, most people would rather be elite than basic.

Of course, there’s more to convincing people to join than just the name – the pricing and value matter, too. But your names do play a key role in communicating value and hierarchy to your members, which is why it’s important to get them right.

There are a lot of different approaches that you can use to name your subscription plans. Some are creative, while others are straightforward. We’ll talk about how to pick the right approach for your community in the next section, but first let’s just go over what your different options are, along with some real-world examples of each.

Let’s start at the beginning with one of the simplest membership level naming conventions – naming your levels based on the price and payment term.

Typically, you’ll use this when your plans have the exact same access/features, but the only difference is the payment term.

For example, with Tennis TV, you just get two membership plan options: 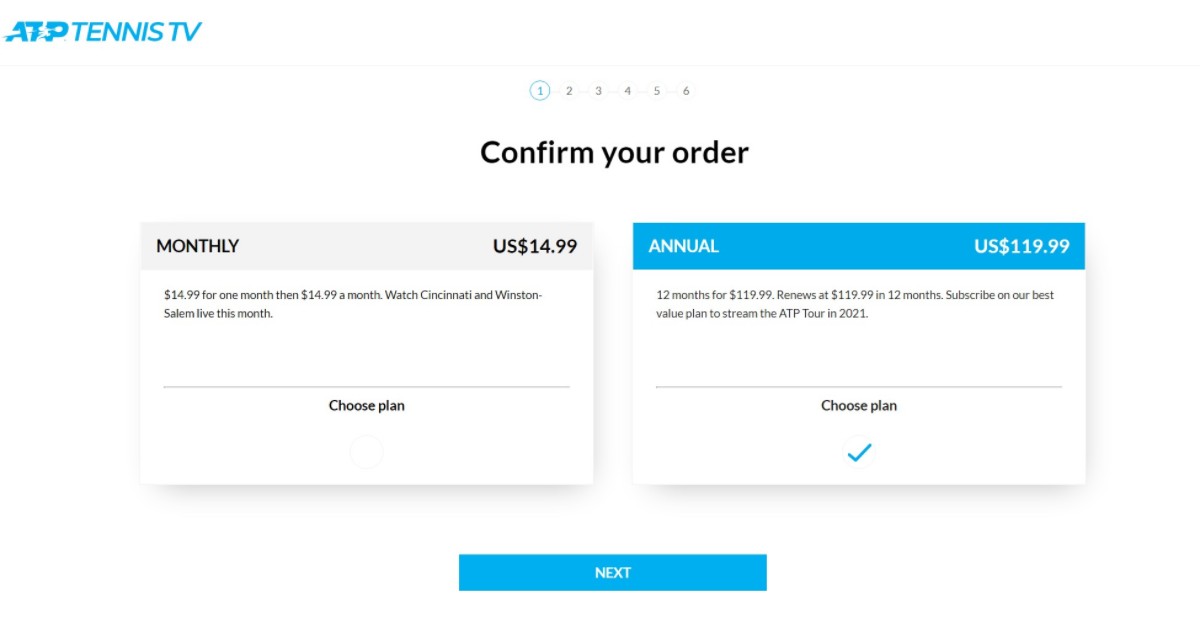 With Babbel, you get more options, with each named after the number of months that you get access:

There’s nothing really creative about this structure, but the names make it very clear what subscribers get for their money.

User type membership levels are subscription plans where each plan is targeted towards a specific type of user or group of users. Common examples are:

For example, Spotify offers four different membership plans, each named after the type of user or users that the plan is focused on: 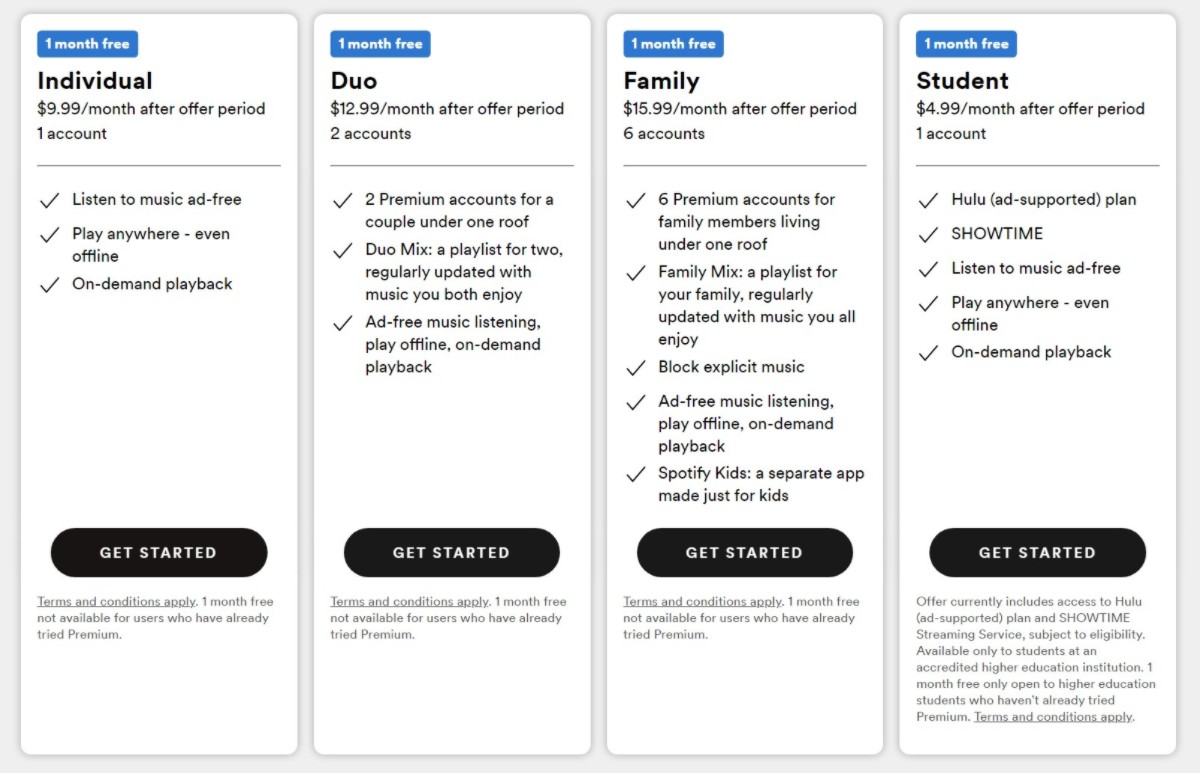 Apple Music uses the exact same structure, though it lacks the Duo plan: 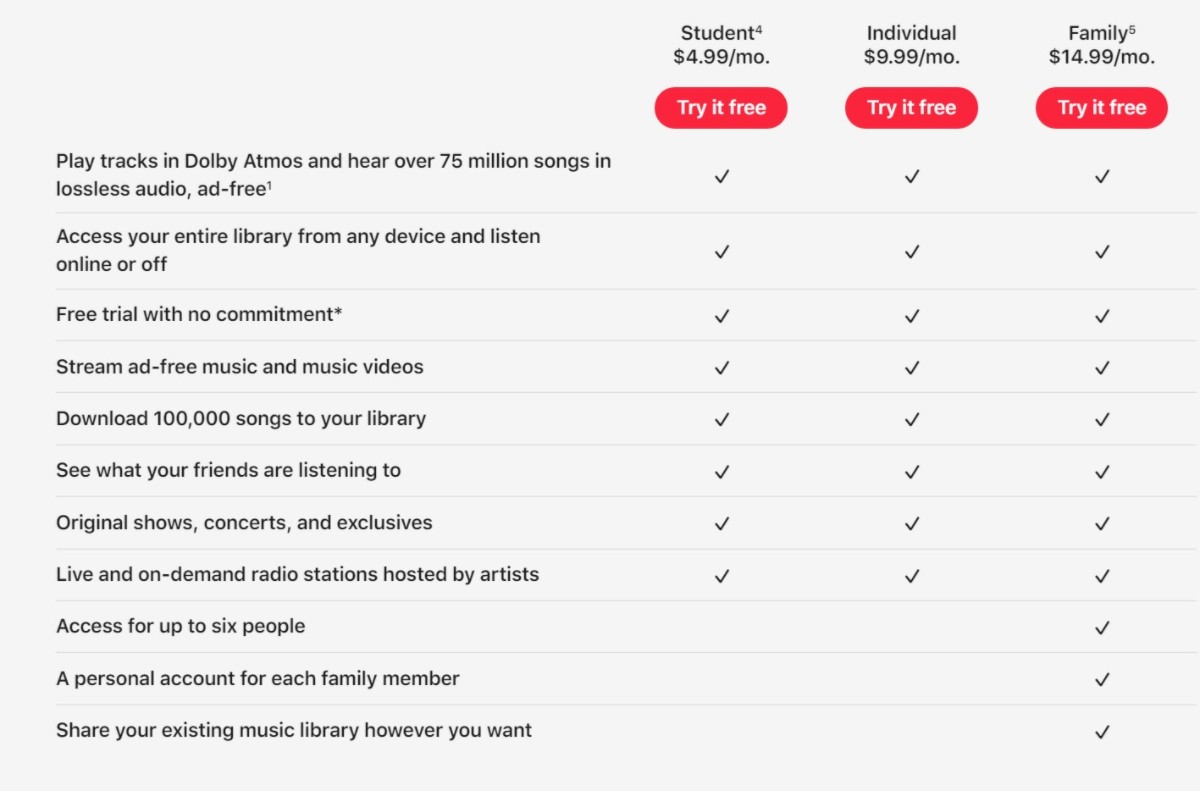 Or, if you sell to both individuals and businesses, you could use a structure like:

This type of naming structure can be especially useful if you sell both individual and group membership plans because it instantly lets people know which option is right for their situation.

You’ll see this structure a lot with media companies and news organizations. For example, the Wall Street Journal offers membership levels for: 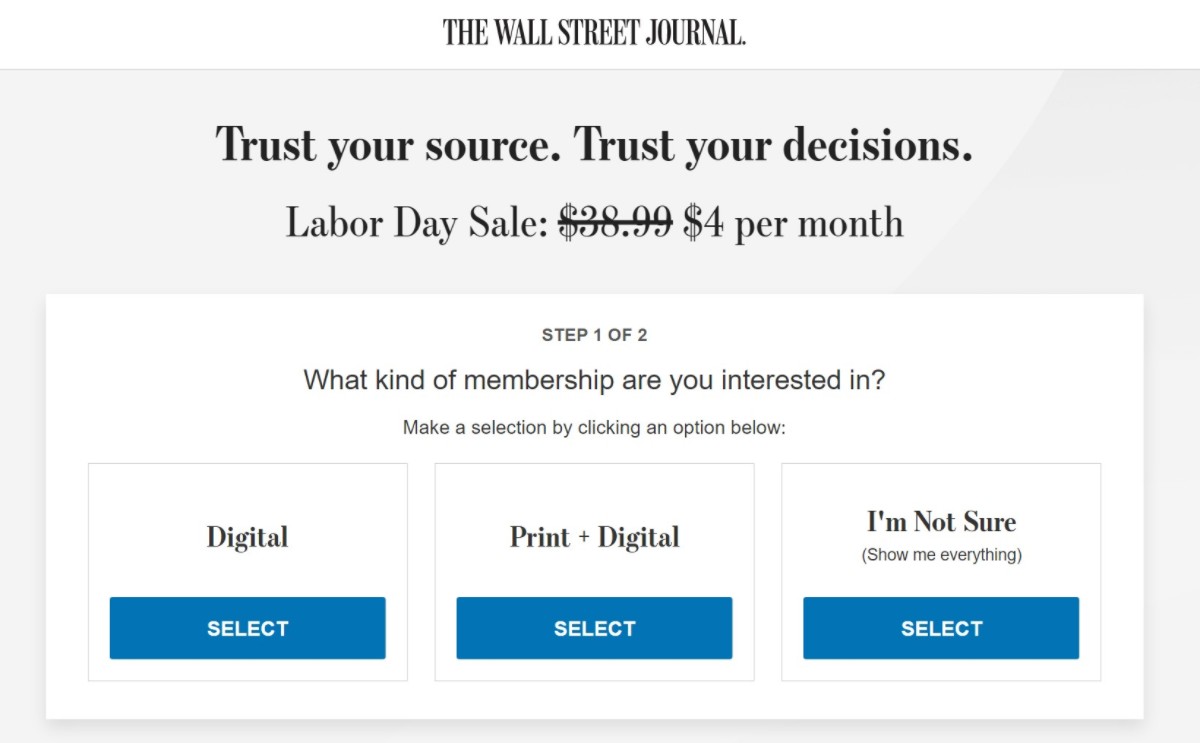 These names certainly aren’t creative, but they do quickly let people know how they’ll be able to consume content with each plan.

Many membership sites use tiered membership levels. These are configurations where each level of membership gets access to different features, content, privileges, etc.

Unlike the previous membership naming structures, tiered membership levels open the door to a lot of creativity because you can use pretty much any name for each tier (which isn’t the case for some other naming conventions).

With that being said, you do still typically want to incorporate two details into your tiered naming convention:

At first, the names seem pretty generic. After all, “Premium” and “Elite” are pretty common terms. But the magic is the fact that Scott’s Cheap Flights is focused on helping people find cheap airfare deals.

So instead of being generic, “Premium” and “Elite” are actually creative terms that line up with the fare classes that many airlines use. 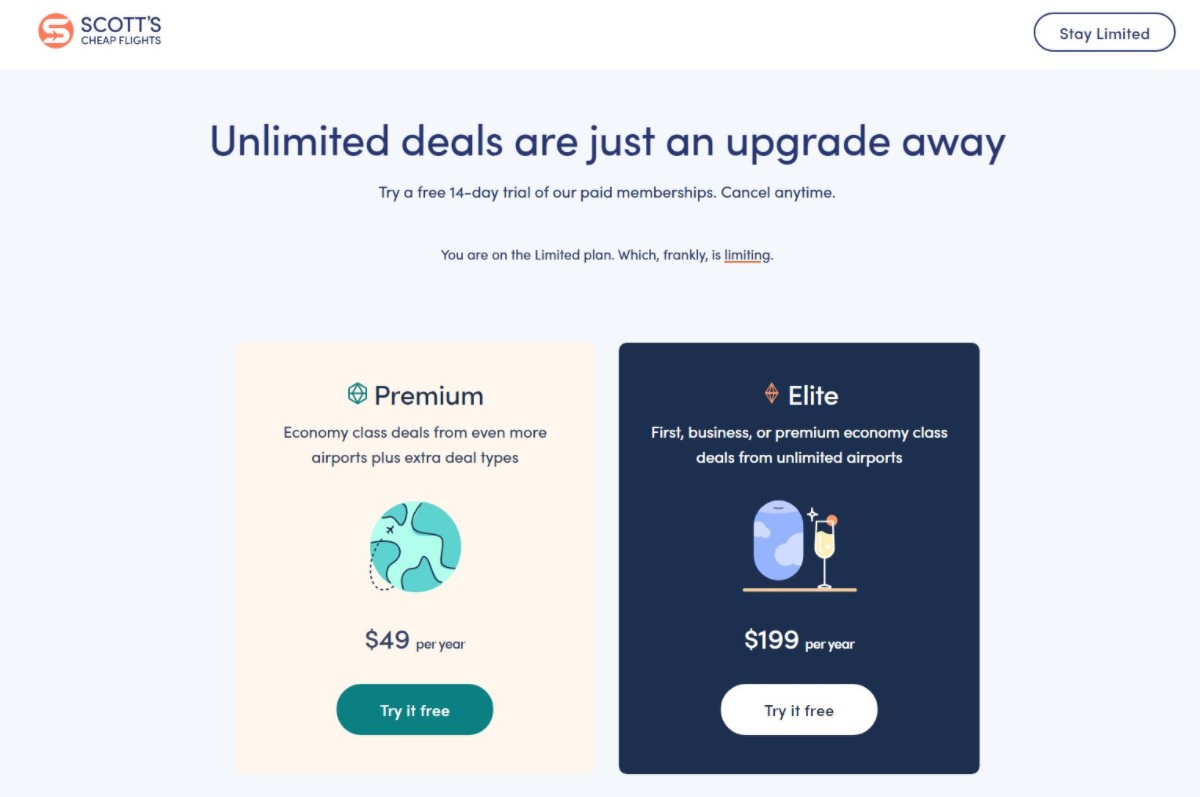 On the other hand, you don’t always need to be creative, and a lot of brands go for more “traditional” tiered membership level names like the following:

This approach can be a good option if you’re in a more “traditional” niche or if your audience tends to be more traditional.

For that reason, you’ll see this type of naming convention on a lot of Patreon membership communities, though you can use it with your own self-hosted community as well.

For example, Data School offers a supporter-based naming structure that also brings in some elements of tiered memberships: 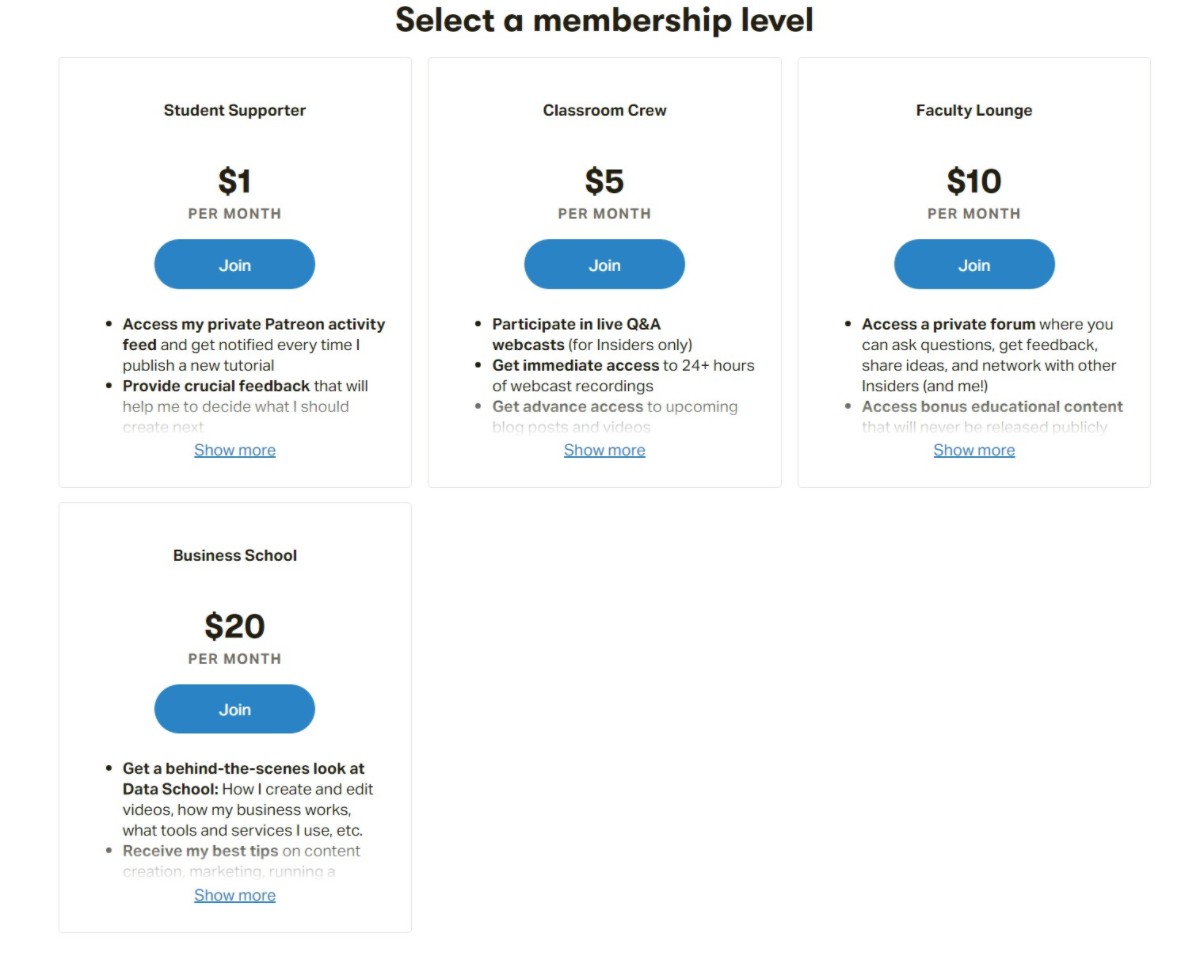 These are descriptive names that refer to the supporters themselves: 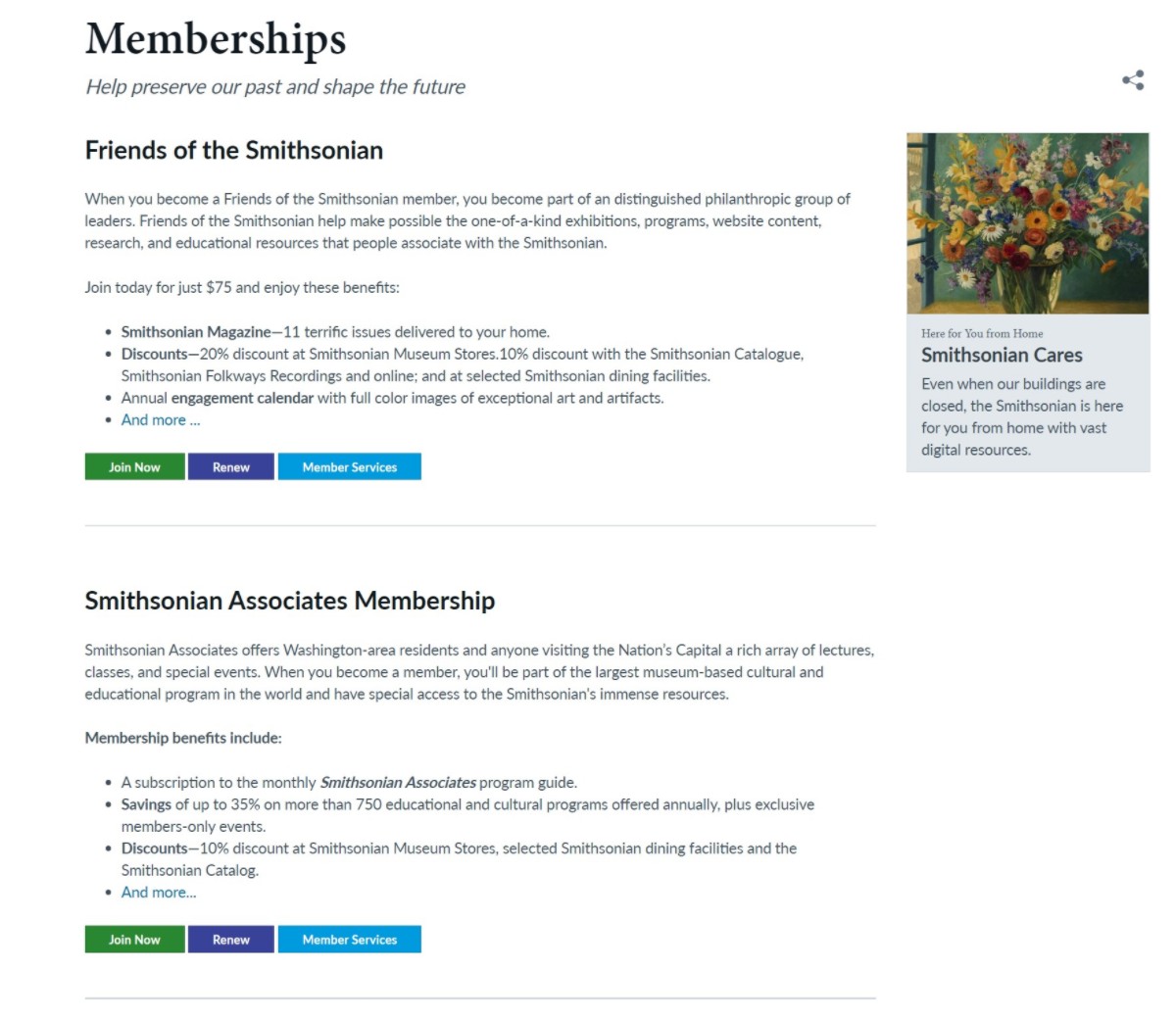 This approach is useful if you offer different plans that are each focused on a specific topic/interest.

For example, TradersFly offers separate membership plans all based around different areas of investing such as swing trading, technical analysis, small-cap investing, etc. To differentiate those different subscription plans, they name each plan based on its topic: 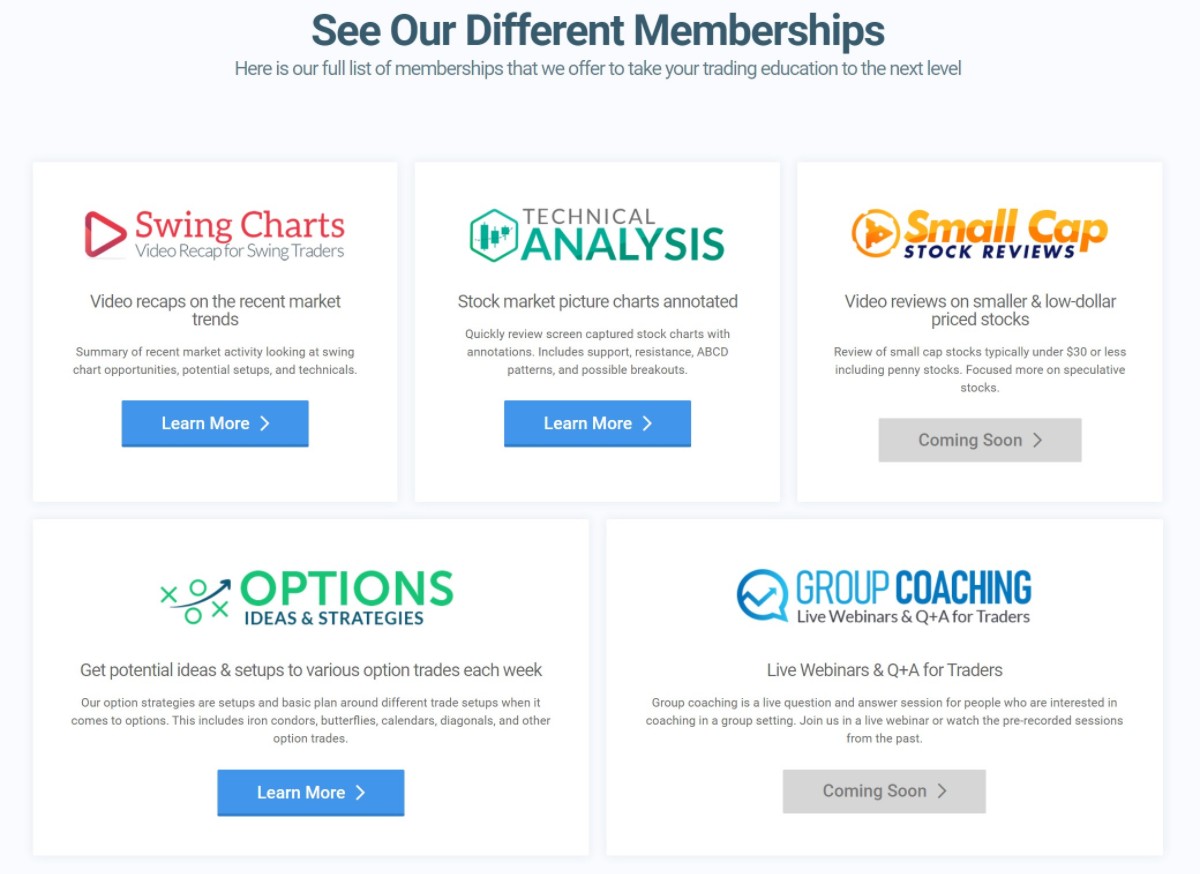 How to Come Up With Your Own Membership Level Names

To finish things out, let’s talk about how you can come up with subscription plan names for your own membership community.

Focus on the Differences In Your Plans

Before you can name your subscription tiers, you need to have a really clear idea of the differences in your plans. You probably already know these differences, but it helps to write them down just to put it into words.

Once you have a clear picture of the differences between your plans, you should already have a good idea of what type of membership level naming convention to use.

For example, if the only difference between your plans is the billing term, you should probably just use a simple price/term-based membership convention so that your members can intuitively know the difference.

If you have two plans with identical features and one plan offers monthly access and the other offers yearly access, it’s needlessly confusing to come up with special names for them – “Monthly” and “Annual” work just fine.

On the other hand, if you offer tiered plans with different features, then you can get more creative with your names.

Think About Your Audience

The next step in developing your own names is to think about your audience.

Who your members are will play a big role in whether you should keep things simple or use more creative and branded membership levels.

On the other hand, if you’re in a very serious space, then you might want to avoid creative names and just stick with something simple like Basic → Intermediate → Advanced.

If you offer tiered membership levels, it’s important that your naming structure follows a natural progression from the most basic tier to the most advanced tier to illustrate the hierarchy of your plans.

Here’s an extreme example to show why this is important:

Well, it would be very confusing if you named your tiers like this:

Everyone knows that silver is higher than bronze, so it would confuse your members if the naming hierarchy was off.

Of course, in the real world, your example probably won’t be that obvious, especially if you’re coming up with your own creative names.

This again ties with knowing your audience…

For example, if you have a membership community built around cricket (the sport), you could use cricket-related terminology for your membership level names. The hierarchy might not be clear to people who don’t understand the sport – but as long as cricket fans can understand it, that’s totally fine.

Nudge People Towards a Certain Plan

As we mentioned earlier, one reason that membership level names are important is because of the psychology behind them.

For tiered membership plans, you can use the naming structure to push people towards a certain plan.

Let’s look at an example to illustrate the point.

Let’s say you’re primarily using tier 1 as decoy pricing. That is, you don’t really want people to sign up for tier 1 – you’re mainly using it to push people towards tier 2.

Maybe you have a site that teaches people how to play American football. You might name your plans:

No one wants to be on the practice squad because those people aren’t on the “real” team. So by structuring your plans like this, you’re reinforcing the decoy effect and further nudging people towards tier 2.

We’re not saying that the name alone will push people towards tier 2. But if you’ve already set up the pricing structure and features in a way to nudge people towards tier 2, adding the naming convention on top can further reinforce what you’re trying to do and make your efforts more effective.

Create the Perfect Names for Your Membership Levels

How you’ve structured your community and plans will play a key role in how you name your membership tiers.

If you offer a single feature set with different billing terms, you’ll want to keep things simple and just use term-based membership names. But if you offer tiered memberships, you can spice things up with creative membership level names that help you connect with your target audience.

With the examples and tips in this post, you should now have the knowledge to pick the perfect names for your site.

If you’re still in the early stages of planning your membership community, we also have lots of guides that can help you figure out the technical details of running a membership site – check out these posts to get started:

Do you still have any questions about membership level names or creating a membership website? Let us know in the comments!