The first major update since the launch of Profile Builder has finally arrived!

For those who just met up with WordPress, Profile Builder is WordPress registration done right; it lets you customize your website by adding a front-end menu for all your users, giving them a more flexible way to modify their user-information or to register new users.

This update-pack was long awaited by a lot of users, especially since it took us a while to code it, test it and release it; so from now on we will focus mainly on more, smaller updates rather than fewer and bigger ones. But enough with the technicalities, let’s see what we got:

New features (from now on) will come as an addon pack, meaning they are present in the plugin core, but not active until you activate the one(s) you need. They can be found in a side-tab named “Addons” (intuitive, isn’t it?). Here you can activate whichever you need, and once active it/they will be listed in the side-tab also. This is done so for those who don’t need it, so it won’t complicate their experience with Profile Builder.

The addons added this update are: 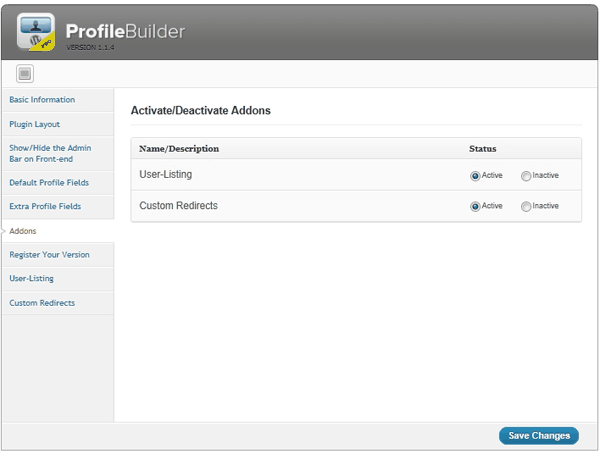 The User-Listing feature is basically a short-code, [wppb-list-users]. Once added, head over to the back-end and activate the addon (if you haven’t done so already). There, under the User-Listing tab you will find some settings, regarding user-listing options. These set by an administrator will become the default settings in the front-end for every visitor/user to see. They can be temporarily overwritten by the visitors (locally), if they wish to do so, but they will revert to the settings the administrator saved once they close and reopen their browser. 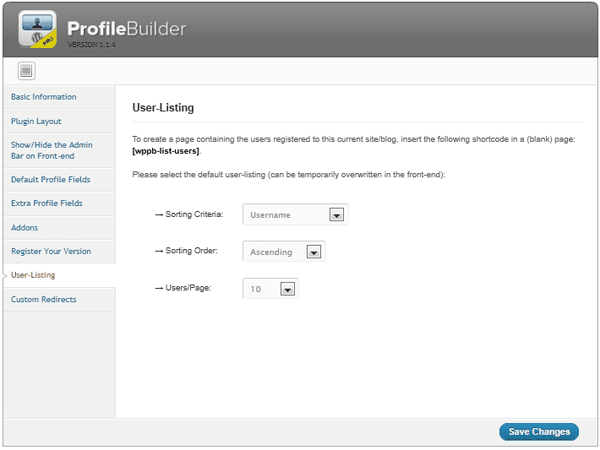 The Custom Redirects are just that: you can set up the pages a visitor sees after he registered or logged in or if he tries to access the wordpress login page or the wordpress register page. Besides the fact that you can activate the “Custom Redirects” addon, you can also chose which of these four “actions” to activate (individually). 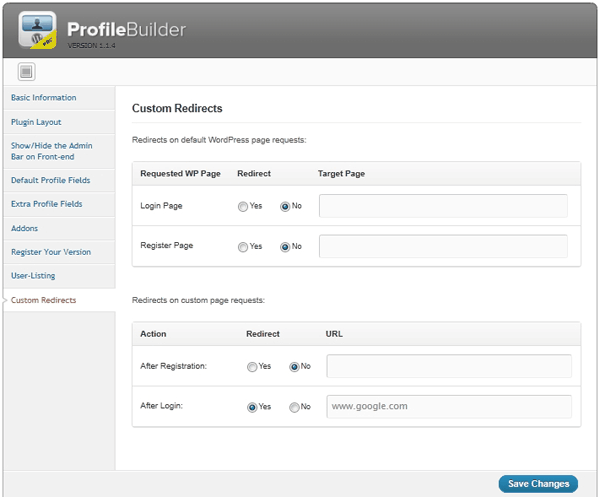 3.) Register a user with a certain role:

The old register shortcode was [wppb-register], and after registration the user created was (by plugin default) subscriber. I used the expression “plugin default” because it didn’t use the settings set up in the back-end of your wordpress installation, it just registered the user as subscriber.

But now this downside was taken care of: when placing the register shortcode, be sure to add the role=”user_role_name” parameter next to it, like so:
[wppb-register role="user_role_name"].

Thus, to register every new user as an editor, just use the following shortcode:
[wppb-register role="editor"]

Don’t worry in case you get it wrong, this won’t create a new user-role. Instead it falls back to the wordpress role set up in the back-end, and in case something should happen (not set up, or what not) it falls back to subscriber.

We would also like to thank for anyone else who sent their version of the localized Profile Builder, and apologize we didn’t mention them here, but fear not: they are still listed in the readme file!

Last but not least thanks to all our users, who suggested really cool ideas, that were implemented in these new features, with the rest to come in the next update(s).

UPDATE:
Apparently there were some hidden bugs, one where the user tried to register and kept getting the “you need to agree to the terms and conditions before signing up” message even though there was no active Terms and Conditions checkbox. The second one was in the redirecting process after registration; it didn’t redirect all the cases (both when a user signs up and when an admin creates a new user). Both of them are fixed and version 1.1.5 was issued.